We were delighted when London Schools Cricket announced that they were creating a new award in honour of our very own Peter Hardwick. Pete loved the London Schools Festivals, having taken squads there over many years, and should have been taking his under 12s squad there this year to compete. However it was great to see Dawn there at the under 15 festival to present this new award to Cardiff & Vale’s David Kett. This is a tremendous achievement by David as the award is given to the player for playing the game in the right spirit, as nominated by all the coaches and managers at the festival. 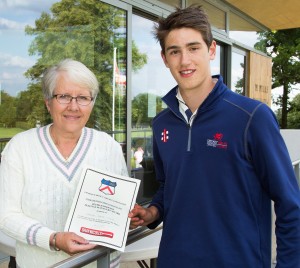